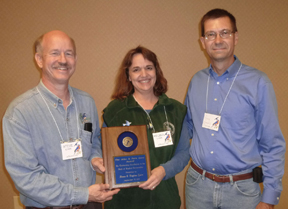 Steve and Regina Garr of Jefferson City, Missouri were presented with the John and Nora Lane Award from NABS for outstanding work in the field of Bluebird Conservation. Longtime NABS member Ron Kingston received the award on their behalf in Jackson. Greg Beavers, NABS Treasurer, presented the award to the Garrs at the Missouri Bluebird Conference on October 1. Steve Garr has worked tirelessly since 1979 educating the public through his newspaper columns, magazine articles, television appearances, and personal appearances at various conferences and events on how to help the bluebird. He personally erected and monitored many nestbox trails in both Tennessee and Missouri. He co-founded two NABS Affiliates: Tennessee Bluebird Trails (2000) and the Missouri Bluebird Society (2006). Besides doing field work, Steve volunteered for NABS by serving on the Board of Directors and as Vice President and President (2000–2006). Regina Garr has been an enthusiastic partner in all of his conservation work, helping spread the bluebird conservation message. Even though Steve has had a Life Membership in NABS for decades, he continues to support NABS with additional Corporate memberships. He and Regina have donated NABS memberships for door prizes at countless seminars on bluebird conservation — giving many people their start in an association with NABS and organized bluebird conservation. Steve and Regina Garr continue to promote bluebird conservation on all fronts: education, in the field, and in leadership roles in the organizations that promote bluebird conservation.

The John and Nora Lane Award was created to honor Canadian conservationists John and Norah Lane, who were among the first people to sound the alarm about declining bluebird populations. The Lanes’ bluebird trail consisted of 4,750 nestboxes and stretched almost 2,500 miles.

Reprint with permission from winter edition of NABS Bluebird.  Photo by Jim Rathert.